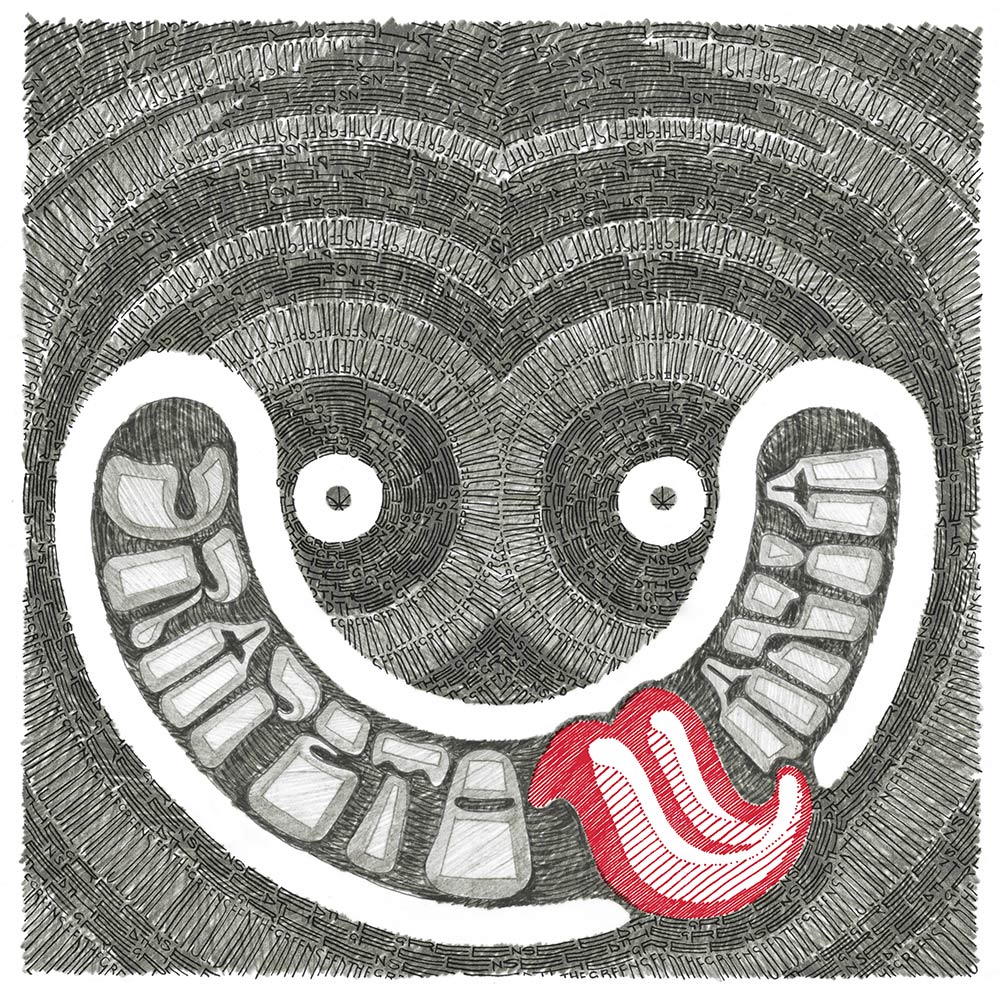 Drapetomania (pronounced druh-pet-oh-may-nee-uh) has all the gusto and urgency of a debut. Brimming with lyrics of fury courtesy of emcees R-Tist and C.O.M.P.L.E.T., the stabbing attacks of dynamic DJ duo FX and Jeff C, and a lush soundworld layered with rich textures and trunk-rattling beats. Drapetomania is a feast for the ears — a Loveless for heads steeped in Buhloone Mind State (and vice versa).

R-Tist has long been a fantastic producer  — one who mixes MPC mastery with live instrumentation. Still, joining forces with the production crew at Birmingham-based label Communicating Vessels – namely producer Jeffrey Cain, engineer Kyle Ginther, and mastering guru Paul Logus – has taken his beats to dizzying new heights. You’d be forgiven for thinking that Drapetomania wasn’t the product of the Dirty South rather than the blunted grit of J Dilla’s Detroit or the otherworldly productions of Lex Records. But Drapetomania is no homage – it’s a unique blend of heart, laughter, and guts.

Speaking of Lex Records, Drapetomania is also a feast for eyes thanks to the astounding artwork of enigmatic art collective EHQuestionmark– the design collective behind much of Lex’s output, including records by Shape of Broad Minds, Neon Neon, and DOOM.

In fact, it was EHQuestionmark who suggested the album title: Drapetomania is a bit of 19th century pseudoscience – the “disorder” causing a slave’s urge to flee. The idea of drapetomania inspired the eerily psychedelic minstrels that adorn the album’s artwork – which looks especially striking as an LP. With that last conceptual detail in place, Drapetomania gained extra heft as a work of art… Though none of that matters without the strong material that lives within the grooves.

Vinyl was always in mind when The Green Seed created Drapetomania. Not only does The Green Seed want listeners to revel in the warm sonics, they want to take them on a ride. The “Up” side of Drapetomania features some of the album’s trippiest soundscapes – but don’t expect to be lulled into submission. Drapetomania will earn your respect with the sterling one-two-punch of “Jude Law” and “Up It Steps.” The former — with its refrain “I DID NOT PLAY OBI WAN!” — is a declaration of independence both playful and strong as quartered steel. The latter is a dense and otherworldly haze of elastic loops, with all four members slashing through the humidity to further their statement of intent. It’s the sound of sweat equity.

Things get dark and dank as the record spins. “Chance2Say” and “Make Room” tackle evident truths and cranial nightmares. “All The Same” lobs accusations against the “new minstrels” while “Amigos” – all tears and smiles — is all about keeping a level head amidst the chaos.

The record flips and “Is Where The Heart Is” sets things off with a volley between lovers and emotional vampires, but as the “Down” side spins the journey of Drapetomania brings us to its biggest bangers and anthems. “Diss Connect” compresses the distracted arrogance of our TMI culture into a succinctly hyped-up homily. “Road Trip” is Drapetomania’s is a soaring tribute to competitive excellence and taking its show on the road (To see The Green Seed rock a crowd is a giddy experience all its own).

“Gotchoo” hits hard with The Green Seed lyrically laying out its arsenal and giving healthy respect to its audience. “Gimmicks” is a fierce and pacing bit of backseat direction – the aural equivalent at yelling at a television gunked up with pap rap and trendy MCs. As the needle nears the spindle we get “Town of Steal” – an ode to The Magic City, a call for revival, and Drapetomania’s most elemental production. It sounds like a victory lap but, really, it’s only an intermission.

Drapetomania often contemplates bondage – artistic, romantic, etc. – but, ultimately, it’s a soundtrack to Freedom… And whatever comes next.

“The latest top-shelf export from the Heart of Dixie is Birmingham hip-hop outfit The Green Seed, which has appeared on Southern Living’s blog but has yet to get a mention in more traditional outlets like Complex or XXL…Comparing the socially conscious four-man crew’s rhythmic and lyrical dexterity to Ghostface Killah and Kool Keith isn’t stretching too much.” ~ Nashville Scene

On “Jude Law”
“Behind the blood smearing and skull smashing is an archetypal story,enacted by a set of characters, and a solid hip-hop record laced with multisyllabic deliveries.” ~ Potholes in my Blog

“The mood of the clip (“Jude Law”) is a match for the band-of-outlaws energy of the group, who spitball long chains of lyrical-exercise raps over a hard, powerfully chopped horn sample.” ~ Wondering Sound

“The Green Seed is a four-person hip-hop outfit roaming the streets of Birmingham, helmed by founding MC R-Tist. Their tracks are accessibly melodic and constructed with the sensibility of classic ’90s forebears like De La Soul—and, like De La, offer messages of positivity and cultural awareness with deft humor as opposed to wearisome sermonizing.” ~ Oxford American